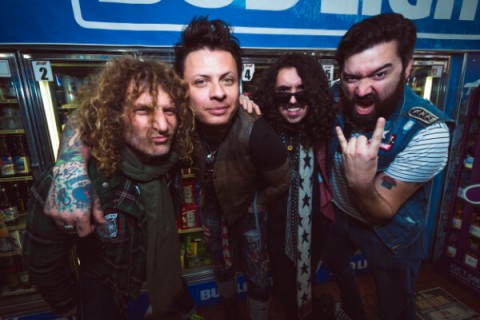 Los Angeles hard rock act Bullets and Octane exploded onto the scene in 2003 with their debut EP “One Night Stand Rock N Roll Band” which was followed by their debut album “The Revelry” produced by Gilby Clark of Guns And Roses also on Critereon Records. They released their first major label album “In The Mouth Of The Young” soon after which pushed the band onto major tours and shows including Download Festival and on The Family Values Tour with Korn, Stone Sour, Flyleaf and Deftones. 2018 sees the band celebrate 20 years with the release of a new album “Waking Up Dead” and a headline tour in the UK and Europe so we catch up with the band to find out a bit more on Bullets & Octane.

Tell us about the process of writing and recording the new album.

It’s a love, hate relationship with the creative process. It’s exciting but it can instantly become frustrating. You have to be able to balance the days and know that some days are just not as creative as others. Usually somebody brings in a riff or a melody, and if it sounds cool or has a vibe to it we’ll expand on it. It’s pretty exciting when songs go from a really rough idea on your phone, to a full blown rock ‘n’ roll tune. We mostly just love getting music out there. It’s something that brings us great joy when our songs are finally out in the world for the people to listen. With this release we’re definitely trying to get back to our Rock and Roll roots, recording what we wanna hear on the radio.

What were the ideas, themes or inspirations for “Waking Up Dead”?

Themes are usually about our every day struggles in Los Angeles. It’s a city that definitely wears you down, physically and psychologically, so it’s nice to have a way to release some of that pent-up energy in our songs. It’s a record we’re really proud of, everyone in the band has been put through a lot of shit in the last few years, so it feels really good to just make a loud rock ‘n’ roll record.

What does it feel like as an artist waiting for the songs you’ve lived with for some time to get released to the fans? Is there a sense of excitement or a little panic in there too?

Absolutely a little bit of both. I’m assuming it’s what parents feel when they take the kids on their first day of school. It’s got to be nerve-racking.

What can people expect on your upcoming tour?

Very energetic fun shows. We are really trying to make sure everyone that comes to the show leave with a smile, with their rock and roll quota filled. It’s always great to get out on the road, meet people who listen to your music and have them meet you, establish a connection, you know? Theres supposed to be a connection between the artist and the listener which seems to have disappeared in recent times.

How do you pick out a setlist and what are some of your favorites songs to play?

Just trying to balance the set bringing it up-and-down. Be very dynamic with it, it can’t all be fast songs, Can it? “Going Blind” or “Bad Motherfucker” are a couple ragers for sure!

It got very rowdy in Scotland, so we can’t wait to get back. Malmo Festival in Sweden was great, the atmosphere and the crew made a truly memorable show. We can’t thank everybody enough.

What have been your greatest challenges to date, and your favourite moments musically?

I guess everybody’s greatest challenge is just keeping yourself up, and getting back up after you get knocked down, because it happens very often and that’s just the way the music industry works. Just gotta believe in what you do and keep doing it.

With technology changing so much over the last few years and seemingly not slowing, and TV force-feeding us the lowest common denominator, what hope is there for it?

I think it’s on the loop, kids will get bored of what they get fed through the mainstream bullshit, and they will leave the room and start going to shows again. I don’t think there’s anybody in this world who wouldn’t enjoy a great live act.