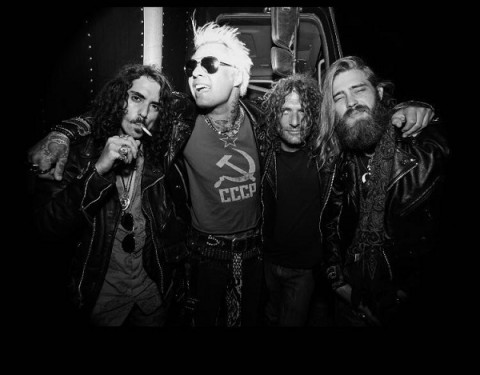 Bullets and Octane is a hard rock band originally from St. Louis, Missouri and now based in Southern California. They have released 7 full-length albums and an EP since 2003, including their breakthrough album “In The Mouth Of The Young” while signed with RCA records. The band has toured in Europe, Japan and North America since December of 1998, playing with bands like Avenged Sevenfold, Stone Sour, Social Distortion, Bad Religion, Eagles of Death Metal, Unwritten Law, Deftones, CKY, Korn and Flogging Molly, amongst others, as well as headlining their own tours.

Burning at Both Wicks is the debut single from the new album. It’s equal parts Green Day and Buckcherry mixed with the typical swagger and attitude that we’ve come to expect from a band that’s toured with everyone who’s anyone over the last decade or so.

Equally at home playing on a metal bill as they would be on a punk bill, the band easily cross the genres and instead of blurring them into some intelligible mess, they instead bring their own sound to the fore and create something that remains fresh, surprisingly so for a band 8 albums into their career.

It bodes very well indeed for the new album released later this year.